Two things are very clear when students walk into the Chess Room at Jones Leadership Academy.  One is that Warren and Yolanda Woodberry always show up as the best version of who they are, and the second is that they expect you to do the same.  Although the Wooderrys run a chess club for Toledo Public Schools, the reality is that chess is only one of the many skills they teach.

More than a chess club
While encouraging for club members to pursue creativity, Yolanda has art projects regularly available.  To broaden horizons for young people, Warren has stocked a bookshelf with National Geographic magazines and nudges attendees to find something new to read about.  Experiencing culture and community involves field trips to the Valentine Theater and reading to students at elementary schools.  Warren and Yolanda work together on the important issue with all club members:  manners, eye contact, social norms, community focus and accountability.  And they also play and teach chess. 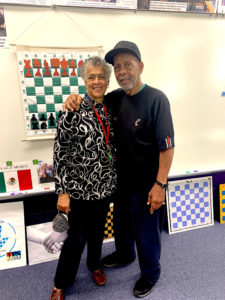 20 years ago, Yolanda and Warren moved from the island of Antigua to Toledo, Warren’s hometown.  They formed an Art and Black Inventors Club for children at the Frederick Douglas Community Center.  When Warren brought in a chess set, it caught the kids’ attention and The Woodberry Chess Club was started. “We haven’t had the chance to look back,” says Warren.

Chess is applicable to life because it teaches players to slow down and think through available choices.  The Woodberrys insist that student Chess Club members write down their moves.  “See where you move, write where  you move,” says Yolanda.  “Kids are learning to pause, look at their decisions from different angles, and then go back and evaluate what worked and what didn’t.” The Woodberrys help students transfer this technique to their daily routines.

Champions at life
“Our program is not designed to create chess champs but instead to get them through the everyday routines of school,” says Yolanda.  Warren likens himself to the elementary school coach who takes his students to a certain level of mastery.  “Who would have expected that I would be teaching chess?  I’m not a great chess player.”  The Woodberrys have success stories that include wins at tournaments, near and far.  The trophies that crowd a classroom display table and the photos of student champions lining the walls document the successes fostered in this room.  “This program aims to build self-confidence. Once kids become more confident they start to want to learn.”  Yolanda explains.  Success both at the chess table and beyond becomes a reality for their Chess Club members.

The Wall
Warren, who wants his students to realize that they come from a long line of successful people, insisted that a wall outside of the Jones Junior High School cafeteria could be utilized as a teaching opportunity, so he created a collage of noteworthy Black inventors.  Warren often sees kids stopping to have their picture taken next to the mural and is certain that it  provides those children with pause to think that there are people who have done great things who look a lot like them.

A new year
7th-12th grade students from Jones, Martin Luther King Academy, and Escuela Smart Academy fill the Chess Room 4 days a week during the school year. Spaces are limited so that the Woodberrys can concentrate their efforts on each individual child. After the disruption caused by the pandemic, Warren and Yolanda are eager to get back to teaching children how to win at the games of life, and chess.

What kind of car do you drive?

A few years back I turned in my Honda Civic for an Odyssey so we could provide transportation to the tournaments for those students who needed it.

Do you and Yolanda play chess?

Yes.  We often take our chess board and set it up while we are waiting for a table at a restaurant.

People would be surprised to know…

I dropped out of high school in the middle of my senior year at Scott so that I could tour with a singing group called The Barons.  We played all the local clubs and toured in Detroit and Chicago
with BB King.

Is this a retirement job?

At 84 I am too old to retire!  Most of my career was in the clothing industry in Atlanta, New Orleans and New York City.  In Antigua I owned a restaurant, roller skating rink, a boxing club and a driving range.

You aren’t afraid to try new things are you?

When Roland Richardson retired from Toledo Edison in 2005 after 33 years with the company, he created a budget to see how comfortably he...
Read more

Judy Paschalis lived in South Toledo for years surrounded by houses and neighbors, but two years ago she and her husband found a new...
Read more