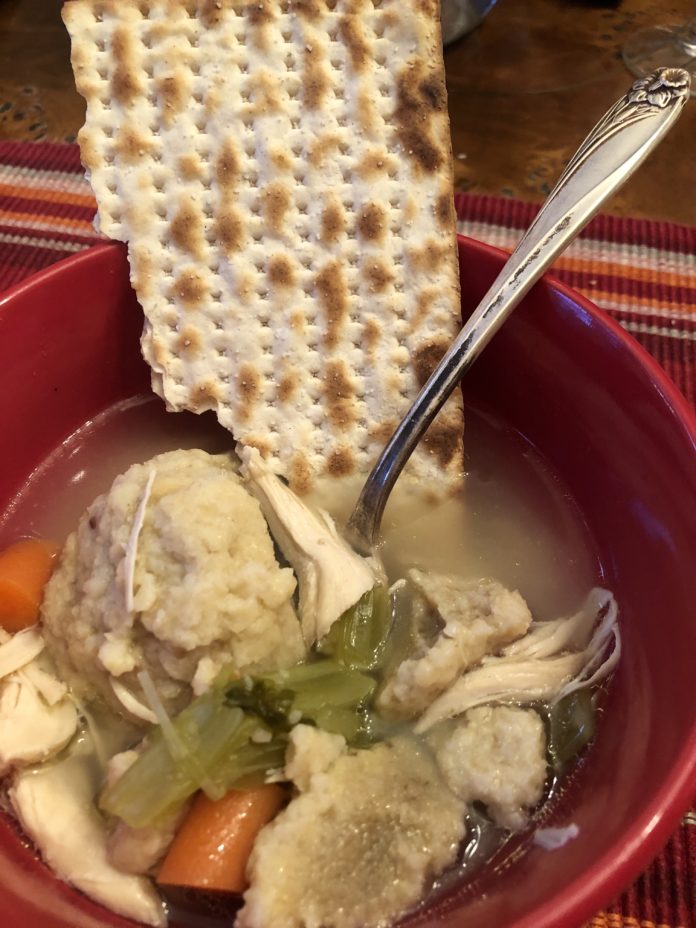 I was honored to be invited to a friend’s Passover Seder last weekend.  A meal steeped in tradition, remembrance, promise and love for humankind.  There have been few, if any, gatherings that I have enjoyed more.

The food selections were made from old, family recipes; some was strictly traditional such as greens with salt, boiled eggs, gefilte fish and matzah.  The balance of the meal is determined by the family presenting the Sedar.  Often brisket, and for us, chicken, savory potato kugel and matzah ball soup.

I asked if I could share the Matzah Ball Soup recipe. A very simple preparation full of flavor made with chicken and some vegetables, and the bread of the day – matzah, the unleavened bread taken with the Jews when they fled Egypt.

Place two or three chicken breasts, skin on with bones, in a large pot with 10 quarts water.  Peel  a whole onion and add to the pot for flavoring. If needed add some chicken bouillon to enhance flavor.  Salt to taste. Bring to boil and then reduce heat to simmer for 3 hours.

Strain chicken from the soup and allow to cool. Remove chicken meat from bones,  discard bones and skin and cut chicken meat into smaller pieces and place back in the soup. Add chopped celery and chopped carrots for additional flavor and simmer soup for an additional 30 minutes or until carrots and celery are cooked.

Use matzah meal available in many grocery stores. Combine two cups of matzah meal, two eggs, one tablespoon cooking oil and a dash of salt.  Add small amounts of water, as needed, to make a smooth texture. Cover and refrigerate for 20 – 30 minutes or longer.  Bring a pot of water to a boil.  Meanwhile, form the chilled mixture into balls with your hands (may coat hands with oil to avoid sticking). Place formed balls into the boiling water.  Turn down heat to a simmering boil cooking matzah balls for 30 to 40 minutes.  Drain water from matzah balls and place the matzah balls into chicken soup.