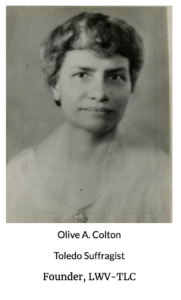 The name Olive A. Colton may not ring a bell, but the League of Women Voters of Toledo-Lucas County are working to change that.

The event will take place from 10:30 to noon at Forest Cemetery, to honor the founders of Toledo’s chapter.

Honoring the Past, Empowering the Future

Despite a life of accomplishments, including being named Woman of the Year by the Toledo Times in 1937, Colton was buried in Forest Cemetery without a grave marker upon her passing in 1972.

“Olive was an amazing woman and it’s time she gets her due,” said Eleanor Kostecki of the League of Women Voters of Toledo-Lucas County. “This week is National Voter Education Week and we can’t think of a better way to honor her than by trying to educate the public about the importance of voting.”

A grave marker for Colton will be unveiled and dedicated at the event, which will conclude with a tour of Forest Cemetery led by local historian Robyn Hage, who will discuss the important Toledo suffragists buried in the cemetery, including Olive A. Colton, Sarah Ann Secor Bissell, Amy Grace Maher and Sarah R.L. Williams.

“These women fought for women’s right to vote in Toledo and nationally,” wrote Kostecki in a press release. “They were friends of national activists Susan B. Anthony, Lucy Stone and Elizabeth Cady Stanton, who were often present at local meetings. Three of the Toledo women lived long enough to see their work come to fruition through the passage of the 19th Amendment.”

Dr. Turner became the national president of the organization 2 ½ years ago with an intention to increase the League’s efforts at diversity, equity and inclusion. The League is a tri-federated organization — with chapters on the local, state and national levels — whose ultimate goal and purpose is empowering voters to defend democracy by exercising their right to vote.

What started 100 years ago in the 1920s as a source for women to navigate civic engagement in their communities now focuses on diversity and inclusion on racial, ethnic, cultural and generational lines. “With more diverse membership,” Dr. Turner explained, “we gain a wealth of experience and we can learn from each other. We are working on the full education of voters; Not just in terms of registration but also by exploring ballot issues with forums and debates that we sponsor.”

The national office of the League coordinates advocacy in the disparate halls of power, fighting for voting rights and civil rights in legal challenges across the country. “Just last year,” Dr. Turner said, “the League was involved in 60 cases across the country to empower voters. And we are winning those cases.”

Dr. Turner explains the League of Women Voters’ mission in simple terms: “Voting is not a partisan issue but rather, clearly, an American issue. It is important that everyone who is eligible has an opportunity to participate while not feeling intimidated or that they are in a hostile environment. We very much believe that if you are eligible to vote, that you should be able to register and cast your ballot in a clear and unfettered way.” While there is much in the news about encroaching voting restrictions, some in place and some proposed, Dr. Turner says, “those are the cases [The League] has been involved in. We don’t care who you vote for, rather we are focused on the right to be able to cast your ballot.”

Dr. Turner explains the reasons behind her travel to Toledo for the upcoming weekend’s “Honoring the Past, Empowering the Future” event as, “a great opportunity to honor the women willing to step forward and start a league on the forefront of the [work of our organization]. We sometimes take for granted that there were people who came before who paved the way so that we can do the work we are doing today. I am honored to attend and to highlight the fact that the history of the League has enabled us to be leaders today. The organization of this event says something about the Toledo community in showcasing this recognition of the founders of the local chapter and in making this event happen.”

Make it a League of your own

Dr. Turner encourages “anyone who is interested in preserving democracy and encouraging civil engagement to join the League. The key is, it doesn’t matter about a person’s gender, ethnicity, race, etc. We are looking to have a more diverse League — the more diversity, the stronger our organization will be. Members can spend as much time, or as little time, as they want. We are very flexible and welcoming. “

Resources supported by the League of Women Voters

To determine what precinct your address falls in, your voting location, the candidates and issues who will appear on your ballot, as well as answers to questions presented by the public, visit  411.org for unbiased and accurate information.

Visit https://www.lwv.org/legal-center-search to learn more about the activity of the League of Women Voters’ Legal Center’s recent legal activity in the courts.

The League also will posthumously award Colton with its first Cave Civic Award, which will be given as a scholarship to a University of Toledo student who has shown outstanding civic engagement beginning in 2023.

“We are going to pay it forward by using that money for a scholarship for students who are civically engaged,” said Kostecki. “It’s a great way to honor Olive’s memory.”