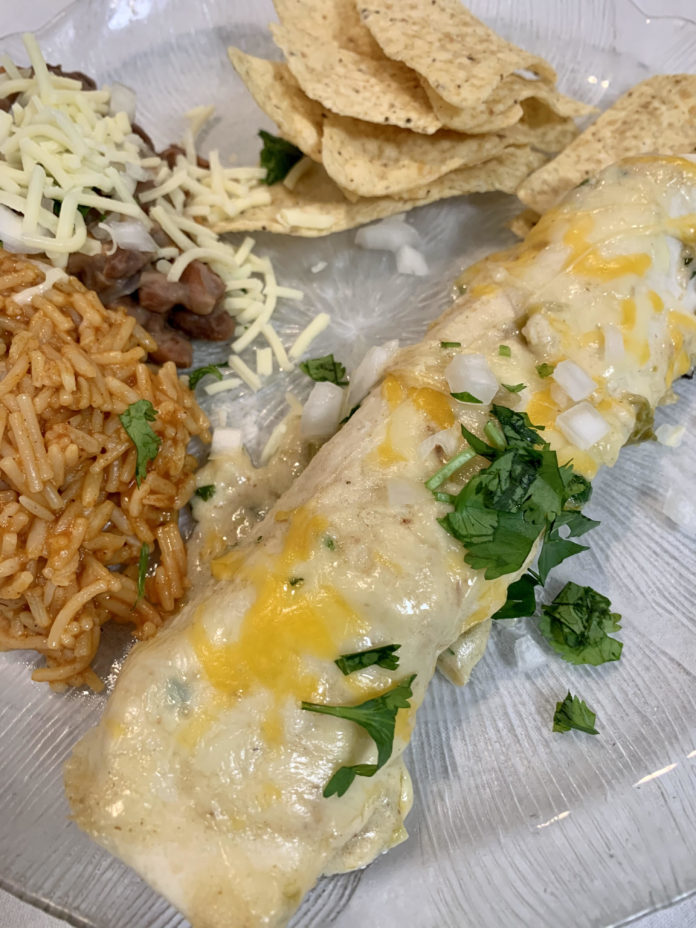 Sometimes a quick, well-flavored meal is the perfect answer to a long week.  One that has few rules is even better.

Recently I had a taste for Mexican food and did not want one of the heavy-cheese covered concoctions many local restaurants serve.

I happened to have left-over roasted chicken and flour tortillas so I decided to prepare chicken enchiladas.

This is what I did.

To make a filling, I chopped onions (I used white but any would work) and sauteed them in corn oil (any oil would work) for a couple of minutes.  I then added jalapenos (canned or fresh, as many as you want), a few sprinkles of cumin and shredded chicken.  I swirled that around in the pan for a minute and then filled flour tortillas with the filling.  Before rolling, I sprinkled jack cheese over the filling.  The rolled tortillas were placed in a prepared baking pan, seam down.

Using the same pan, I added 2 tbsp butter and 2 tbsp flour and stirred until the flour taste was cooked out (Yep, I was making a white sauce.) Then I poured in approximately one cup of milk and stirred until a creamy consistency formed.  I added more jalapeno and cumin to the sauce.  Then I poured the sauce over the tortilla rolls and then added a sprinkle of cheese (mexican blend, jack, colby or whatever you want) and chopped onions and cilantro.  (If you are making more than 4 enchiladas, you will want more sauce – double the recipe.)

I popped the foil-covered pan in the oven (350 degrees) until hot and bubbling – 20 minutes or so.  I removed the foil and let the enchiladas brown for a minute.

This dinner turned out very well and we enjoyed every bite. As the picture shows, I served with refried beans and spanish rice.

Make this your way with cheese types and amounts you enjoy.  Make it as spicy as you want.  Canned jalapeno is much more mild than fresh.  Cumin reminds your taste buds that you are eating Mexican food as does fresh cilantro.  Use any filling: chicken, ground beef sauteed with taco seasoning, beans mixed with cumin and cilantro, or any combination that appeals to you.

I guess you can say this is “no rules enchiladas.”