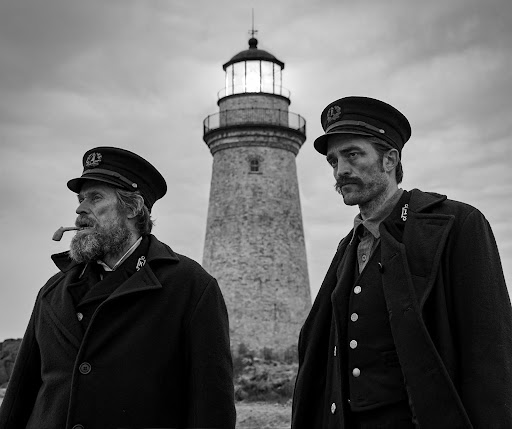 Do not go into “The Lighthouse” expecting a “normal movie,” whatever that means. This is a film designed and executed to be unsettling, even off putting. Featuring a cast of (mostly) just two men, set in a claustrophobic environment, filled with sometimes indecipherable period dialogue and surrealism, “The Lighthouse” is a challenging work that isn’t everybody’s cup of gin. But go down this rabbit hole and you’ll see sights so utterly unique you’ll never forget them.

In the late 1800s, two keepers arrive at a New England lighthouse for a month’s shift. The younger, Ephraim (played by Robert Pattinson), is inexperienced and quiet about his past. His superior, the older Thomas (Willem Dafoe), is gruff, demanding and vulgar. The film starts observationally, watching the relatively quiet relationship between the pair as they work to maintain the lamp.

But then things start to feel wrong. Visions begin to appear. Confessions are made. The past is dug up. Warnings start to go unheeded. We begin to wonder how much of what we’re seeing is what’s really happening, and how much is delusion made manifest. How much time has really passed? Is what Thomas saying accurate, or is it gaslighting? Is Ephraim mad? Perhaps both of them are?

The film is a tour-de-force of performances and production design. Both Pattinson and Dafoe deserved Oscar nominations for their work, perhaps being shunned because the Academy didn’t know what to make of the movie. Director Robert Eggers (who made the similarly surreal and period-set “The Witch”) works to give the movie a remarkable and distinct look, right down to the black-and-white photography and nearly-square aspect ratio. The result is a movie that may be hard to swallow for many viewers— but then, some of the tastiest bites are

“The Lighthouse” is available for streaming on Amazon Prime.