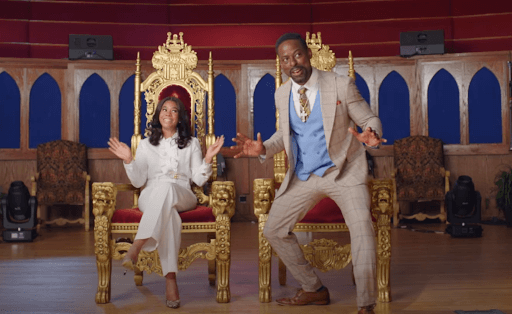 “Honk for Jesus. Save Your Soul.” is based on Writer/Director Adamma Ebo’s short from 2018 with the same name, inspired by her complicated relationship with organized religion. Ebo’s screenplay critiques the current status of Black churches, but it comes from a place of love.

The film is done in an “Office” styled mockumentary that follows Pastor Lee-Curtis Childs (Sterling K. Brown) of a fictional megachurch and his devoted wife and first lady Trinitie Childs (Regina Hall). Their church was highly successful and once served a congregation in the tens of thousands until Lee-Curtis found himself in a sexual misconduct scandal, which drove away most of his large congregation and inevitably caused those precious donations to disappear. Trinitie stays by his side as they try to rebuild their church and reputation for the Lord, but in reality, to maintain their extravagant lifestyle.

The duo hires an award-winning documentarian to make a film about the weeks leading up to their megachurch’s grand re-opening. Of course, their attempt at documenting their comeback journey does not quite go as smoothly as they had planned.

Brown and Hall give layered performances that seamlessly balance comedy and drama. I felt some profoundly emotional moments sprinkled in wildly comedic beats within the same scene. Regina Hall’s character feels like a ticking time bomb. Trinitie endures embarrassment after embarrassment as Lee-Curtis tries to regain his former glory. She explains, “I would sooner kill him than leave him.”

Sterling K Brown puts on a larger-than-life performance, having an almost literal God-like presence when he preaches. However, what Lee-Curtis is preaching, he doesn’t necessarily follow himself—thriving off the attention, power, and validation of being on stage.

The hypocrisy is apparent early on that Lee-Curtis and Trinitie are using the church stage for fame and power rather than teaching the gospel. The massive closet in their church is full of extravagant designer suits, shoes, and hats because “God don’t like ugly.” By using the bible to justify their excessive lifestyle.

Adamma Ebo doesn’t always smoothly toggle back and forth between the actual film and the documentary footage, which I found hard to keep track of at times. The film has several funny gags showing how the characters act and speak in front of the cameras vs. how they act and speak when the cameras are off. Hinting that some gospel preachers are putting on a performance that’s attempting to make people believe whatever will drain their wallets. The ending doesn’t provide closure as it abruptly ends, but you get a sense that the couple got what they deserved.

“Honk for Jesus. Save Your Soul.” is worth watching for Sterling K Brown and Regina Hall’s chemistry. The film is a reminder that people who manipulate Christianity for their own personal agendas are the ones who need saving.