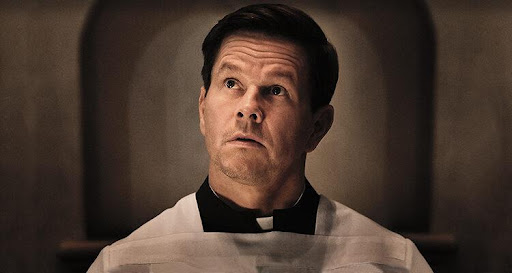 Here is a beautiful film about redemption with a sincere message about how none of us are un-savable, no matter what we’ve done in our past. The inspirational biopic follows the life of Father Stuart Long (Mark Wahlberg), who has called this a passion project. Wahlberg admittedly had had a troubled past before he became famous, so it’s no surprise that he’s starring in a film about redemption.

After surviving a motorcycle accident, Stuart Long, a former boxer and lifetime agnostic, starts to wonder if he can use his second chance to help others, leading to the surprising realization that he’s meant to be a Catholic priest. When we’re introduced to Stu, he is a bit cocky, overconfident, and seemingly has an endless supply of ambitions. He is constantly chasing his dreams and doesn’t take no for an answer (that’s the boxer in him). At a young age, he was faced with tragedy, and you can tell it created space within him that was full of sadness and anger. Stu’s overconfidence and determination are how he masks those deep emotions.

While his boxing career is dwindling sporadically, Stu decides to move to Hollywood to become an actor. According to Stu, that’s what his life calling was meant to be. Stu struggles to land significant roles, but we still see this hopeful confidence. If someone doubts him making it as a big-time actor, Stu sees that as extra motivation and a challenge to prove them wrong.

One day at his new dreadful deli job, Stu meets a girl, Carmen (Teresa Ruiz), and follows her to church; this is done in a non-stalkerish way, but more towards the romantic side. Carmen has heavy ties to the church and is entirely uninterested in Stu because she can tell he’s not the church-going type. To woe her, Stu starts attending Carmen’s church regularly. It’s hilarious watching him make more traditional, conservative churchgoers deeply uncomfortable. Stu’s rough around the edges, outspoken, and swears a ton. Eventually, Stu begins to connect with Carmen, and this is when the story takes a hard turn and thrusts more tragedy into Stu’s life. Stu experiences a near-death motorcycle accident, and he feels a calling to become a priest. This is where the film follows Stu on his journey to becoming a priest while facing tons of obstacles.

Wahlberg becomes unrecognizable as the story progresses. His character starts as a fit, athletic boxer, gradually becoming a sluggish overweight character. The make-up and prosthetics completely transform the actor; however, this film is not about an external transformation. The power of the story comes in Stu’s pursuit to become a priest. Around every turn, he’s met with a roadblock. His family is one of them. Stu’s parents, Bill Long (Mel Gibson) and Kathleen Long (Jacki Weaver) are a formidable force against the church. They’ve dealt with enough tragedy in their life that they don’t believe in what the church stands for. They even mock him for wanting to pursue his newly found passion. The more you doubt Stu, the more he will prove you wrong.

Wahlberg gives one of the best performances of his career. He perfectly portrays how extremely flawed Stu is. He drinks heavily, swears a ton, and lives recklessly. On the contrary, he’s also a likable, charming person, even though he’s manipulative. Watching Stu transition from a reckless degenerate to a devoted priest is entertaining. Stu believes he’s meant to be a priest even if it seems everyone and everything is in the way of derailing his goal. One of the most powerful scenes in the film is when Stu goes into a prison, where he vulnerably preaches to inmates about how society may not love them, but God still does.

I do have a few problems with the film. The editing is disorienting in a few action scenes. Sometimes the narrative doesn’t indicate how we got to a particular location, and it’s hard to tell what year we’re in as the story progresses. In the subplot with his father, Bill, it felt like the relationship wasn’t fully developed. They wanted him to be the antagonist figure in Stu’s life, but it felt rushed, and I didn’t feel the emotional weight. Mel Gibson does give a powerful performance during his limited screen time.

Taking an R-rated approach might sway someone to watch a “faith-based” film that normally wouldn’t enjoy this type of biopic. The story is heartwarming, charming, inspiring, and uplifting. “Father Stu” is simply about a guy whose life goes from one direction to the complete opposite: from self-destruction to redemption. If this film doesn’t inspire you to follow your calling, I don’t know what will.