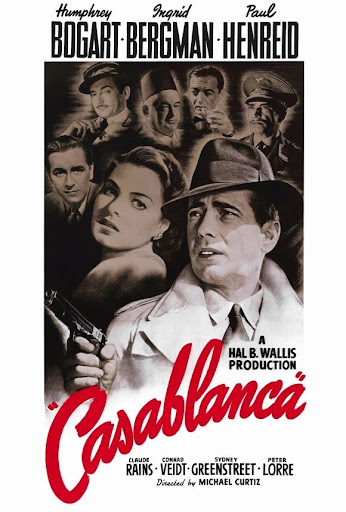 Set aside how pretty much every moment of the classic Michael Curtiz film is iconic, how memorable the performances are, and how so much of it has been absorbed into the fabric of popular culture. Reflect for a moment on how wonderfully witty and well-written the screenplay is. Credited to Howard Koch, Julius J. and Philip G. Epstein, the script for Casablanca has enough wonderful lines of dialogue to fill five movies of similar length.

“What is your nationality?” “I’m a drunkard.”

“I came to Casablanca for the waters.” “What waters? We’re in the desert.” “I was misinformed.”

“I am shocked, shocked to find that gambling is going on here!”

“Just because you despise me, you are the only one I trust.”

“You know how you sound? Like a man who’s trying to convince himself of something he doesn’t believe in his heart.”

“I like to think you killed a man. It’s the romantic in me.”

“This gun is pointed right at your heart.” “That’s my least vulnerable spot.”

Though the film’s immortality has long been established, the success of Casablanca took everyone by surprise at the time. Though the cast and crew were certainly top-shelf, it was just seen as one of the hundreds of films rushed into theaters by Hollywood studios during that era. It was a success, but not a runaway one, and its win for Best Picture was seen as a bit of an upset.

Over time, though, as most of the other movies of its era faded from memory, Casablanca endured. There is something to be said for the cast, certainly, as Humphrey Bogart, Ingrid Bergman, Claude Rains and more crafted some of the most memorable characters in cinema history. But the enduring power of the film may have more to do with the themes at its core. The power of lost love, and the nobility of setting aside one’s emotions for the greater good. Because, after all, “we’ll always have Paris.”

Casablanca is available for streaming on HBO Max.